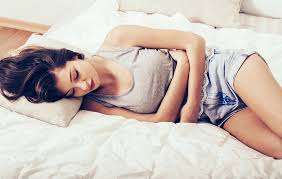 As well as period cramps, ovulation bloating or swollen breasts during your menstrual cycle, hormone fluctuations

can mess with brain chemistry. In a study at New York’s Cornell University, brain scans of women during peak PMS time showed much greater activity in the frontal lobes – the area that controls our emotions. After menstruation onset, the high activity in that area of their brain was no longer visible. It goes to show that premenstrual mood and behaviour changes are a response to a complex set of reactions and chain reactions involving neurotransmitters and hormones.“Not only do hormones fluctuate throughout a woman’s cycle, the rise and fall is substantial,” says endocrinologist Sonia Davison. “At the start of the menstrual period, there is a very low level of oestrogen,

but by mid cycle it has increased tenfold before falling down steeply again just before the next period. Meanwhile, as oestrogen levels are dipping, in the week before menstruation, there is a huge decline in progesterone as well.”Lower oestrogen can wreak havoc on pre-menstrual emotions by dropping levels of mood-boosting hormones such as serotonin and dopamine. Lower levels of ‘feelgood’ hormones may explain why many women report feeling less calm and more aggro or sad at that time of the month. Compounding the issue, a concomitant fall in progesterone levels causes endorphin levels to nose-dive. Endorphins are the chemicals associated with a runner’s high because they elevate mood, so lower levels can also ramp up PMS-related

depression.Surprisingly, studies show no difference in the hormone levels between women who experience PMS and those who don’t. “Where the differences occur is in how these women respond to the hormone changes in their brain,” says Davison. “Some have bigger responses to changes in progesterone shifts while others respond oestrogen fluctuations.”How to repair itHabits native to PMS such as skipping meals and sleep exacerbate symptoms of PMS. Foods that help to stabilise blood sugar are a good start. “Grains that have a low glycaemic index, which means that they provide longer-lasting energy, can also help to increase the hormone serotonin in the brain, so try some chickpeas, brown rice or quinoa,” says dietitian Melanie McGrice. According to reproductive hormone specialist Professor Jayashri Kulkarni, supplements may help. “The two I suggest are vitamin B6 and evening primrose oil, which has healthy essential fatty acids. Both have been shown in studies to help alleviate some symptoms in women with PMS and many women benefit from them.” A 2010 study concluded that the combination of magnesium and vitamin B6 was particularly helpful for decreasing PMS symptoms. “Nuts are rich in both magnesium and B6

, so I’d recommend eating 30 g of unsalted nuts daily in the week prior to your period,” says McGrice. If all else fails, newer contraceptive pills may help to establish a more stable hormonal pattern. An iron deficient

diet has also been linked to increased risk of PMS. University of Massachusetts research found that women with higher non-heme iron, which comes from plant sources, are 30 to 40 per cent less likely to experience PMS. This is possibly because low iron affects levels of serotonin. Good sources of non-heme iron include silverbeet and spinach, broccoli, bok choy, soy beans and lentils.NEXT: Discover why it’s important to get enough sleep each night.