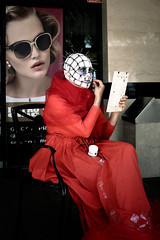 Piercing has been a trend since the ancient das when they were tone in tribal cultures and from the time of mummies all the way to India and then since World War II, has made its way to the Western world, continuing to be one of the major trends of today.

Whether you want to pierce for beauty, for self expression, for conformity, or tradition, or even rebellion, piercing is an age old practice that continues to enchant people today. The most popular and common form of piercing is ear piercing. Women and men alike have been doing it since ancient times and continue to do it today. Many babies have their ears pierced early because it is a sign of feminine grace and elegance, just as it was during the Elizabethan era of England where women wore an earring in one ear as a sign of their ladylike elegance. Today, women still pierce their ears to wear earrings and to be feminine and fashionable while they stick with tradition. Many men pierce their ears, too, whether to make a fashionable statement or to express their wild side. Often men and women use plugs in their ears and stretch out the holes to make some kind of statement.

Another popular form of piercing is nose piercing. Done in many tribal cultures and in India and in the Middle East, nose piercing was a popular trend among many civilizations of people. Even tribal male leaders pierced their noses to display their wealth and power. Nowadays, it still remains popular in the Eastern world and remains a traditional sign of ladylike grace. Piercing of the lip and tongue are also ancient practices that have been around since olden times. Back then it was often done to stretch out the lips, whereas other tribes did them as cultural symbols and respectful gestures to the gods.

Many people prefer nipple, navel, or genital piercing, too, though there is no official record for its origins, it is still practiced. Piercing of all kinds grew popular in the West after WWII, and then gained mass appeal when it appeared in music videos and the media. People began to get and seek piercing afterwards.

If you are interested in any kind of piercing, then be sure to choose a place that is licensed and safe. Having needles stuck into your body is no joke, and can result in serious problems for you if the place is dirty and has unsanitary needles. You could contract diseases. Also, after you get a piercing, follow the instructions very specifically to avoid infection. That means do not stick in fake silver or gold, but use the real thing to keep the piercing area unaffected by dirt or debris or rust which would give you tetanus.

Piercing is a timeless tradition that people have been doing since ancient times and many people do it for a variety of reasons. You might want to do it so that you can wear earrings if you are a woman or a man. Piercing has become a popular form of individual expression as it allows for a person to choose the part of their body to mark with a symbol of sorts. Some people do it to reflect cultural practices done since the ancient times of their culture and even sometimes for religious purposes.